At the risk of being repetitive, financial markets were unsettled and volatile during the third quarter. In a continuation of the year-to-date trend, the stock market’s trend changed multiple times intra-quarter as investors reacted to data and repositioned portfolios. The S&P 500 finished the third quarter down -4.9%, while the 2-year Treasury yield reached levels not seen since 2007. This letter recaps the third quarter and provides an update on the key questions markets faced at the start of the third quarter.

Markets received fresh inflation data and updated commentary from the Federal Reserve during the third quarter. Data showed inflation pressures, as measured by the year-over-year (y/y) growth rate of the Consumer Price Index (CPI), eased for a second consecutive month during August. The decline in inflation occurred against a backdrop of falling energy prices, with AAA reporting the average price of a gallon of gasoline down -27% since peaking at $5.01 in early June. Markets cheered the two consecutive monthly inflation declines, hoping June’s +9% y/y inflation growth rate will mark inflation’s peak.

Easing inflation pressures are a welcome development, but underlying data indicates inflation remains persistent across a broad range of categories. Unlike the headline CPI reading, the core CPI reading, which excludes the volatile food and energy categories, was higher during August: June +5.9% y/y; July +5.9% y/y; and August +6.3% y/y. The divergence, with core CPI rising and headline CPI falling, grabbed the market’s attention and led the Fed to step up its tightening efforts to prevent inflation from becoming entrenched.

Figure 1 updates last quarter’s chart comparing the current round of interest rate increases against prior tightening cycles. Entering the third quarter, the Fed had just raised interest rates +0.75% during June. It was the first +0.75% increase since 1994. Keeping its foot on the pedal, the Fed followed up June’s extra-large interest rate increase with +0.75% increases at both the July and September meetings. The Fed also updated its Summary of Economic Projections at the September meeting for the first time since June. The Fed now projects the benchmark federal funds rate will end 2022 at 4.40%, which implies another +1.25% of interest rate increases by year-end. Back in June, the Fed’s year-end projection was 3.40%. If there was any doubt before, the Fed takes inflation’s threat extremely seriously. 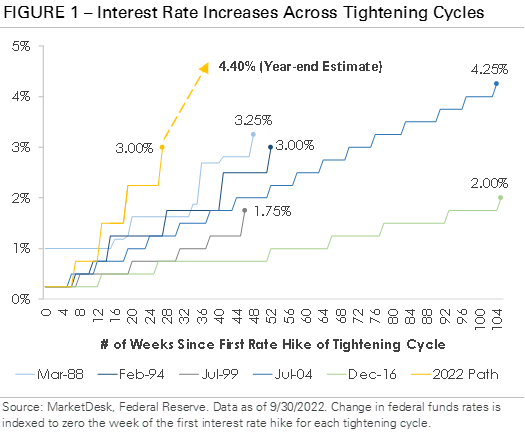 The path of economic growth and the strength of the U.S. economy were another open question entering the third quarter. Data showed the U.S. economy shrank -0.6% on an annualized basis during the second quarter. The negative reading followed the first quarter’s -1.6% annualized decline and meets the technical definition of a recession, which is defined as two consecutive quarters of negative GDP growth. It’s an indication the U.S. economy is slowing after a period of robust growth during the pandemic recovery.

While the prospect of slower growth and a recession are concerning, there are a few important points to remember. First, recessions come in all shapes and sizes. All recessions are different, and there is no predefined path. In our view, the current environment is even more unique due to the nature of the global pandemic, impact of multiple rounds of fiscal and monetary stimulus, and inflation readings at a 40-year high. Second, it is still too early to determine the degree of the current slowdown or how long it will last. Our team will be monitoring labor market data, industrial activity, and housing data in the coming months to gain a better understanding of the U.S. economy’s trajectory.

Corporate Commentary Ahead of Earnings Season

In contrast, other companies continue to report strong demand. General Mills, which manufactures a variety of consumer foods, recently raised its full-year sales forecast due to higher food prices and strong demand for cereal, snacks, and pet food. Coty, which sells beauty products, raised its revenue guidance due to stronger beauty demand. The CFO of MGM Resorts, which operates casinos, reported the company set all-time records at its Las Vegas properties during the second quarter. There are obvious differences in the companies’ end markets and cyclicality, but the guidance updates and management commentary are another conflicting signal for markets to decipher.

The third quarter was an up-and-down quarter in the equity market, literally. Figure 2 tracks the S&P 500’s price during the quarter. The S&P 500 Index of large cap stocks returned -4.9% during the third quarter, underperforming the Russell 2000 Index’s -2.1% return. However, the slight loss hides the market’s two extremes. The quarter started with the S&P 500 gaining approximately +14% through August 16th as expectations for a shorter tightening cycle and potential 2023 interest rate cut propelled stocks higher. 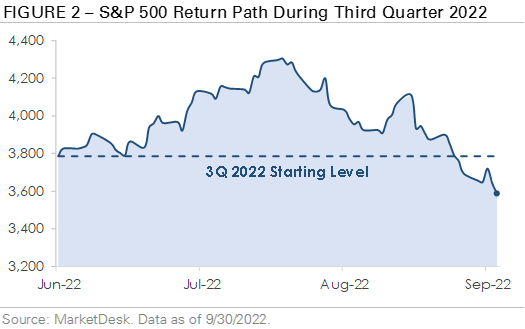 However, the trend swiftly reversed around mid-August, and the S&P 500 gave back all its gains since July 1st, plus more. The late third quarter sell-off was driven by an unwind of investors’ hopes for a shorter tightening cycle and 2023 interest rate cut. The August inflation report, which highlighted inflation’s persistence, and updated Fed commentary threw cold water on the market’s early quarter enthusiasm. Following the roller-coaster ride, the S&P 500 ended the third quarter slightly below where it started the quarter.

After a challenging first half of 2022, Growth stocks started to find their footing during the third quarter. The Russell 1000 Growth Index traded down -3.5%, outperforming the Russell 1000 Value Index’s -5.6% return despite rising Treasury yields. Even the Nasdaq 100 Index, which represents a concentrated Growth index due to its Technology sector overweight, outperformed the S&P 500, trading down only -4.5%. Growth’s outperformance may signal the start of a new investment regime. Why? The first half 2022 sell-off was primarily driven by declining valuation multiples as interest rates moved higher. Growth’s third quarter outperformance suggests investors are less concerned about the risk of lower valuation multiples and more concerned about slowing economic growth. The Growth factor’s sector exposure is less cyclical than Value.

U.S. sector returns were varied with no clear performance trend during the third quarter. Despite soaring inflation and pressure on household budgets, Consumer Discretionary was the top performing S&P 500 sector, with the gains primarily driven by Tesla. Energy was the only other sector to produce a positive return. The remaining sectors were mixed with no clear defensive or cyclical trend. Communication Services and Real Estate both traded down more than -11.0%. The middle of the pack sectors included three defensive sectors (Utilities, Health Care, and Consumer Staples), three cyclical sectors (Materials, Industrials, and Financials), and one Growth-style sector (Technology).

International markets underperformed the S&P 500 during the third quarter. The MSCI EAFE Index of developed market stocks returned -10.4% during the quarter, while the MSCI EM Index of emerging market stocks returned -13.0%. International markets faced a variety of headwinds during the quarter, including Europe’s energy crisis and China’s struggle to reopen and return to growth after its Covid-zero policy. In addition, a strong U.S. dollar, which produces currency translation losses when investments are translated back into USD, weighed on international stocks.

Bonds continued to trade lower during the third quarter as Treasury yields rose to decade-plus highs in anticipation of tighter Fed policy. Figure 3 graphs the 2-year Treasury note’s yield since May 1986. It shows the 2-year yield sits at the highest level since August 2007. To put this year’s spike in bond yields into perspective, the 2-year yield was just 0.73% on 12/31/2021 but now sits at 4.20%. The parabolic move higher in Treasury yields this year provides a visual depiction of the Fed’s aggressive interest rate increases. 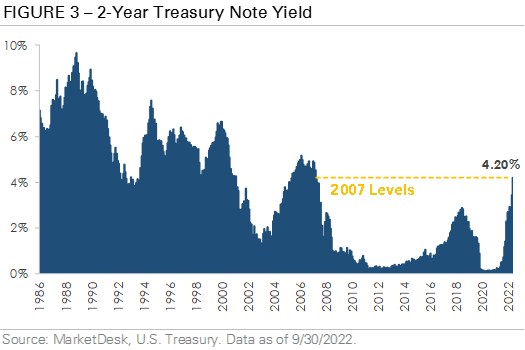 Fourth Quarter 2022 Outlook – Keeping an Eye on the Big Picture

It’s been a difficult year for both stock and bond markets. The S&P 500 Index has produced a -23.8% total return year-to-date, while the Bloomberg U.S. Bond Aggregate has generated a -14.3% total return. This year’s sell-off is particularly challenging because bonds, which historically act as a portfolio hedge during times of market turmoil, have traded down with stocks. 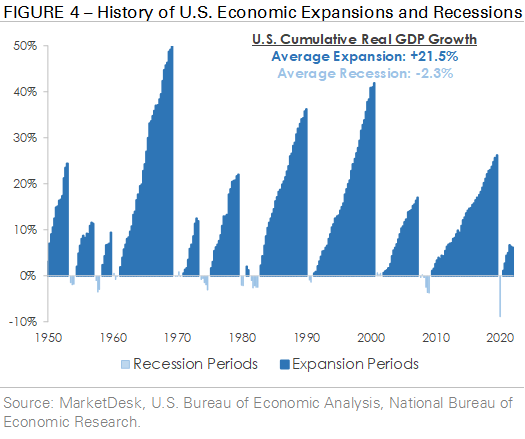 Volatility is the price of admission to investing in economic progress, technological innovation, increased productivity, and earnings growth. Markets experience both good times and bad, and the bad times can test even the most patient investor. It’s easy to sell and go to cash to relieve anxiety about your portfolio and retirement account, but this often creates a bigger issue – when do you re-enter the market? Lengthening your time horizon increases the odds in your favor. Put simply, it pays to be a long-term investor.

Please reach out to your Benchmark Advisory Team with any questions or comments.

Any opinions expressed on this email are the opinion or view of Benchmark Financial and/or an advisor of Benchmark Financial and these opinions are subject to change at any time without notice. The content is developed from sources believed to be providing accurate information. Any comments or postings are provided for informational purposes only and does not represent an offer of or a solicitation for advisory services in any state/jurisdiction of the United States or any country where the firm is not registered, notice filed, or exempt.  Readers should conduct their own review and exercise judgment prior to investing and should carefully consider their own investment objectives and not rely on any post, chart, graph or marketing piece to make a decision. Investments are not guaranteed, involve risk and may result in a loss of principal. Past performance does not guarantee future results. Investments are not suitable for all types of investors. Benchmark Financial is not a broker dealer and does not offer tax or legal advice. Please consult your tax or legal advisor for assistance regarding your individual situation.

Benchmark Financial Wealth Advisors is an independent advisory firm providing wealth guidance, investment management, financial planning and qualified retirement plan services. We counsel individuals, families and business owners on an ongoing basis. As a fiduciary, we serve as an advocate for our clients, providing objective advice and comprehensive guidance across all aspects of our clients’ financial lives.